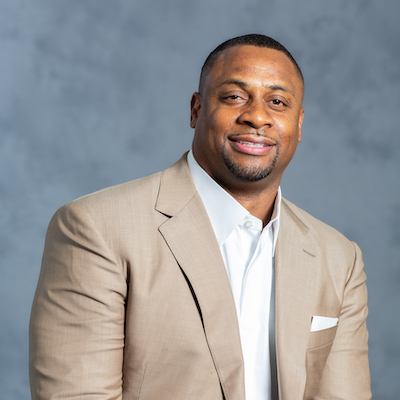 Troy Vincent, Sr., is currently the Executive Vice president of Football Operations at the National Football League (NFL). In this role, Vincent is responsible for several divisions including Business Strategy and Development, Officiating, Game Operations, Policy and Compliance, Football Communications and Marketing, Player Community, and Player Engagement. This equates to shepherding the full lifestyle of players and the game… from youth to NFL Legends.

As a non-voting member of the Competition Committee, Vincent develops programs for players, coaches, and football executives. The NFL Legends Community, NFL Way to Play, and The Rookie Success program are just a few key initiatives created under his watch. In addition, he has implemented programs that focus on wellness/mental health, suicide prevention, stigma change, domestic violence & sexual assault prevention. He works closely with clubs, players, and legends on social justice initiatives in communities across the nation. His influence and impact reach far beyond the football field.

As a leader, Vincent draws from his unique experiences as a player, president of the NFL Players Association, and the Senior Vice President of Player Engagement at the NFL. He employs the highest standards to enhance and preserve football and its value to society.

Vincent began his 15-year professional football career as a first-round draft pick and continues to be recognized for his contributions on the field. He made five Pro Bowl appearances and was selected All-Pro three times. He has been nominated to the NFL Pro Football Hall of Fame and has been inducted into the Hall of Fames for the Philadelphia Eagles, the State of Pennsylvania, the University of Wisconsin, Pennsbury High School, and recently the Philadelphia Sports Hall of Fame.

Before joining the league’s front office, Vincent was the President of the NFL Players Association, serving from 2004-2008. Prior to that, he served as a player representative for eight years. During his tenure with the NFL Players Association, Vincent was instrumental in negotiating, constructing, and implementing three Collective Bargaining Agreement extensions. Personally, Vincent is an advocate against domestic violence and sexual assault. Being directly affected by domestic violence, both Vincent and his wife, Tommi, share a passion and commitment to promoting the message of “Leadership Over Violence”. They serve their community through visiting shelters, speaking to advocacy groups, and encouraging others to act to end domestic violence and sexual assault.

Additionally, through their foundation, Love Thy Neighbor, the Vincent family is dedicated to humanitarian efforts defined by giving back to those in need throughout communities across America, beginning with their hometown of Trenton, NJ.. Because of his charitable endeavors,

Vincent is the only player in history to have received the NFL Walter Payton Man of the Year award and the NFL Players Association Byron Whizzer White Award. He also received the National Jefferson Award for Public Service for extraordinary public service. Vincent also serves on the President’s Council on Sports, Fitness and Nutrition.

A father of five, Vincent and his wife call Virginia home.